Updated 1 year ago by Alex Moore

The Account Status limit allows you to include all accounts, regardless of status, or only accounts that have either an inactive or active status. This is commonly used to perform an action like redirecting any inactive accounts to a walled garden. 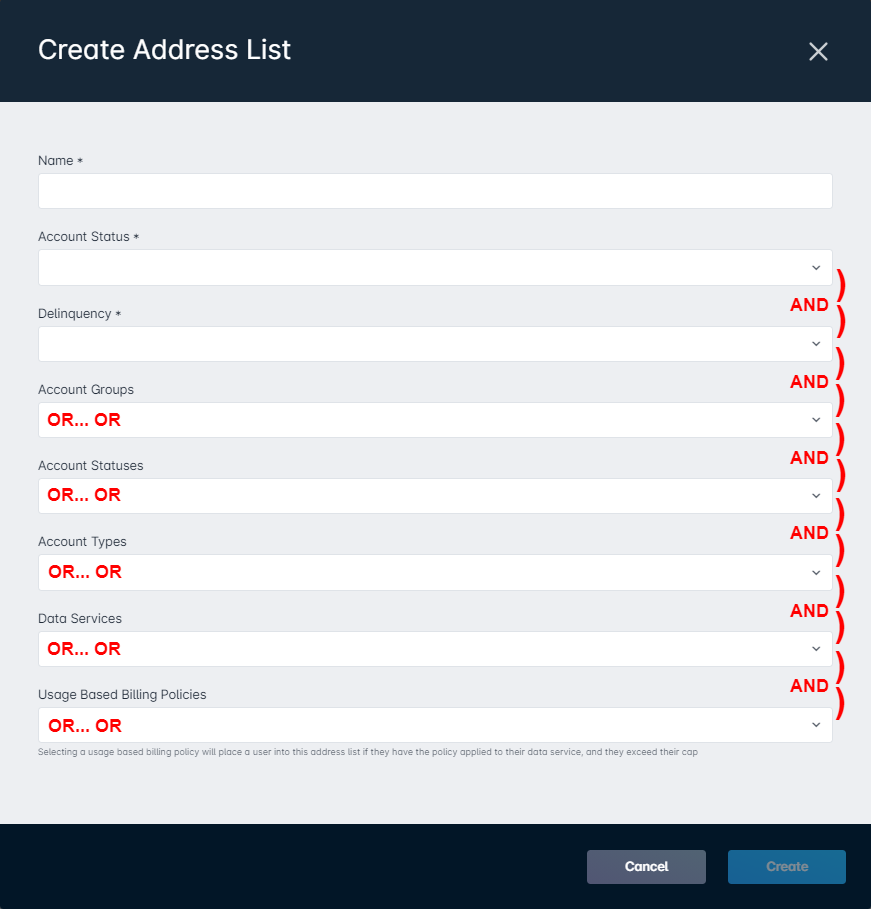 Any account who has either an Active status OR a Lead status, AND is Residential will be placed into this address list.

The Active or Inactive list should be set so that the Account Status is "Only account statuses that activate an account" or "Only account statuses that do not activate an account". If your DHCP is being assigned by Sonar, it makes sense to use an Inactive address list to drop all traffic for accounts that are not active. If your DHCP is being assigned by a DHCP server or RADIUS pool, then soft assigned into Sonar, it makes more sense to drop customer IP traffic that is not part of an Active address list.

Any DataServices address lists can be built so that Account Status is set to "All account statuses" and Delinquency is set to "all". This way if somehow a delinquent or inactive customer were to gain access they would still be rate limited. In the example screen shots, I have built an address list for the Bronze Internet, Silver Internet, and Gold Internet services. If two services share the same data rates, you can group them together in the Data Services.

Imagine the following scenario, you have an area of your network where new equipment allows you to offer larger packages. You are slowly retrofitting your existing network footprint, but for the time being, you have areas in your network where the new speeds are not yet possible. Rather than creating new services for the new speeds and instructing your billing staff on which services are available in which areas, a simpler approach might be to add all customers with legacy equipment into a "Legacy Equipment" account group. Now you can take the same "Gold Internet" service and apply different data rates based on the account group. In the examples below, we have created "OldGoldInternet" as an address list to be applied to any accounts that have the gold service, but are part of the "Legacy Equipment" in Account Groups. This way no matter what equipment is deployed to the account, your billing staff can just add the Gold Internet as a service to any account.

If you have a use case that you are not quite sure of the best way to build an address list for, send us a message at support@sonar.software and we can step through it together!